Ray Johnson's Piano is on hundreds of Billboard Number #1 Songs

RENO NV (IFS) -- RG Ingersoll reported yesterday of the passing of his renown international keyboardist and artist, Ray Johnson.  Ingersoll was Johnson last record producer for his HoTrax Productions company. Johnson who was 82 at the time and was working at the NBC Universal Hilton in Studio City, California. Johnson's hot licks on the piano has been featured on over hundreds of songs and several hundred number 1 Billboard singles.  Ingersoll told a show crowd during a festival on the California Central Coast some years ago, that "Johnson could play for a head of lettuce, and get a hit recording."  Mr. Johnson you will be missed, but thankful that your music and memories will live digitally forever. 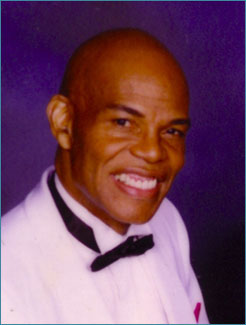 Ray Johnson - R.I.P.
Raymond “Ray” Johnson, 82, of Woodland Hills, California, passed away at his home on Saturday, March 16, 2013. He was born in New Orleans to Plas J. and Grace Johnson.

Ray is an accomplished and distinguished piano entertainer. Born in New Orleans, Ray's early influence in music was blues artists like Charles Brown, Ray Charles and T Born Walker. His mother Grace played piano, so that's the instrument of his choice since the age of 4. She was his first teacher, just by letting him sit by her as she practiced, he watched her fingers and would try to play what she played.

Ray formally studied music at Xavier University and took private lessons for about 4 years. Music was his major at Dillard University for 3 years. At college, Dillard University, in New Orleans, his brother Plas and Ray formed the Johnson Brothers Combo. Together they played gigs in and out of the city for a while. He went to Germany and conducted a military band for a while playing the alto sax. When they left the army, they played in Watsonville and Salinas California for about a year, then they came to Los Angeles and continued to perform together until Plas got his group and Ray organized his sound with piano bass and drums.

In the early 60's he made records with Johnny Otis and his TV Show. Around this time he arranged national hit "Death of an Angel" and "a casual look" with Flip records. He also started at this time to work under Rene Hall and Jimmy Haskell, two renowned recording arrangers.His career highlights are numerous such as: the 75th Oscar Awards as keyboardist for Queen Latifah & Catherine Zeta Jones, with Sammy Davis Jr. along with the Johnny Otis Show. The 6th Annual Rhythm & Blues Pioneer Awards, Band Member of the Monterey Jazz Festival, Pianist with Johnny Otis Band, and more.

Ray appeared also on television portraying Ray Charles for the Heineken Beer Commercial - as a Musical Cast Member in "The Rosie Gier Variety Show" on ABC, The Johnny Otis Show as Cast Performer. He is also good in acting such in "Beggar Man Thief" portraying Nat King Cole, in "The little Richard Story" portraying himself and many other roles.

The 60's was his famous recording years with Rick Nelson, Nat Cole, Sam Cooke, Frank Sinatra to name a few. During this period he was pianist with the #1 TV show in the nation "Shindig". Many International names performed with them on that show . His first video was with Aretha Franklin singing "Mockin Bird"...After his studio he continued with his trio, duo and singles work both locally and in Japan. Ray has been to Japan 12 times (Tokyo 3 times, Osaka 7 times, Fuko o ko once, Kobe once). He just completed 2 months in Dakanyama, Japan at the Tableaux Piano Bar. Now he plans to try Europe and the Middle East.

Ray Johnson can be heard playing the rhythmic piano parts on such classics as "Traveling Man" by Ricky Nelson and "Rambling Rose" by Nat "King" Cole. After several sessions with his brother, sax man Plas Johnson, Ray recorded several sides with soul singer Sam Cooke. Ray provided great insight on his own career, placing his main inspiration on his mother. He also talked about Cooke's last recording session before his tragic death in 1964.


Ray Johnson is the older brother of saxman Plas Johnson (born 1931). Theirs was a Creole family that included other fine musical talents, like singing sister Gwen Johnson and cousins Renald Richard (who co-wrote "I Got A Woman" with Ray Charles), Don Vappie and Michael White. Their father, Plas Johnson Sr., was a musician who played multiple instruments, saxophone, guitar and banjo.

Ray and Plas attended grammar school in Thibodaux and later Dillard University, a private liberal arts college in New Orleans. Ray played saxophone and drums in his school bands, but he settled on the piano when nightclub owner Ernie Stovall hired the brothers, with Plas playing a b-flat soprano sax, for their first gig when they were 13 and 12. They continued to play nightclubs whenever they could and by the late 1940s the teenage Johnson Brothers Combo was a respected band in New Orleans, playing shows at various clubs, including the Dew Drop Inn. Paul Gayten recognized their talent and recorded them for DeLuxe Records in 1949.

Ray mentions Ray Charles, Nat King Cole and, most of all, Charles Brown, as his idols from that period. The Johnson Brothers broke up temporarily when Plas joined Charles Brown's band in 1951. Soon both he and Ray were drafted into the army. Upon getting out in 1953, Ray returned briefly to New Orleans. That is when and where he recorded his four Mercury sides (clearly influenced by Charles Brown), which were released on two singles and have just been reissued by Bear Family on the 2-CD "The Mercury Records New Orleans Sessions 1950 & 1953".

In 1954, he rejoined Plas who had moved to California where he would become one of the busiest session men on the L.A. music scene. Though it took some time, Ray also became an in demand session player, like his brother and other fellow New Orleans expatriates Earl Palmer and Rene Hall. He played piano on the doowop hit "A Casual Look" by the Six Teens (Flip 315, 1956) and also had two solo releases on Flip. He worked with Earl Palmer at Aladdin, for which he recorded two further singles, and had also singles released on Dot, Glam, Liberty, RCA, Imperial and Acclaim. In November 1959 Ray became Ricky Nelson's regular session pianist (succeeding Gene Garf) and Ray can be heard on such hits as "Hello Mary Lou", "Travelin' Man" and "A Wonder Like You". Later he played on albums by Bobby Darin, Nat King Cole ("Ramblin' Rose"), Canned Heat and T-Bone Walker. Ray is the pianist on the first LP ("Let's Go") by the instrumental group The Routers. The flip of their hit "Let's Go" was "Mashy" and I had owned that single for 40 years when I bought the Buena Vista CD release of "Let's Go / Charge + Bonus Tracks "in 2003. On that CD the piano on "Mashy" is mixed much more to the fore than on the single and it shows Ray's piano skills as a sideman at its best. Ray also did television shows, including "The Johnny Otis Show", "Shindig" and "The Rosy Grier Show" in L.A., along with commercials. He has made more than a dozen trips to Japan where blues piano balladeers ar very popular. Today is he still working in the neighbour- hood bars and plans to put out a reunion Johnson Brothers CD.

Not much is available by Ray on CD. Apart from the four Mercury sides mentioned above, three Flip tracks by the Ray Johnson Combo were recently reissued on "Flip Hits! Plus Flip Misses" (Ace 1086) and "Itty Bitty Bee", recorded for Johnny Otis's Dig label and originally unissued, has been included on "Dapper Cats, Groovy Tunes And Hot Guitars" (Ace 351). In 2000 Ray recorded the CD "Ray Johnson Bluz" for the Goad label : http://cdbaby.com/cd/rayjohnson and there may be other recent releases on Goad, which are probably hard to get.

Acknowledgements :
- Tapio Väisänen
- Rick Coleman, Liner notes for "Mercury Records : The New Orleans Sessions 1950 & 1953" (Bear Family BCD 16804, 2-CD). Among Coleman's sources is even a reference to the Shakin' All Over library (Bo Berglind's article on Murray Nash, who produced the New Orleans sessions).

Ray was an accomplished piano-playing entertainer. His early influences were blues artists like Charles Brown, Ray Charles and T-Bone Walker. His mother Grace played piano and was his first teacher. He and his brother Plas formed the Johnson Brothers Combo when both were teens and played gigs around New Orleans, and recorded for Deluxe Records. He attended Dillard University in New Orleans for 2 years before being drafted into the Army. He returned to New Orleans briefly after being discharged, then moved to California to join brother Plas.

Ray’s credits are extensive, ranging from recording with the likes of Ricky Nelson, Nat King Cole, Sam Cooke and Frank Sinatra. He was part of the musical casts of Shindig, The Johnny Otis Show and the Rosy Grier Show, and did commercials (Heineken beer) and some acting (Beggar Man, Thief, portraying Nat King Cole, and The Little Richard Story, among others.) He also did the arranging for the hits Death of an Angel, and A Casual Look. He played keyboards for Queen Latifah and Catherine Zeta Jones on the 75th Oscar Awards, among many other accomplishments.

He is survived by his wife, Helen, brother Plas, and several nieces and nephews. He was preceded in death by his parents and sister Gwen.

Memorial arrangements to be announced at a later date.

Posted by Kenneth Howard Smith at 9:08 AM